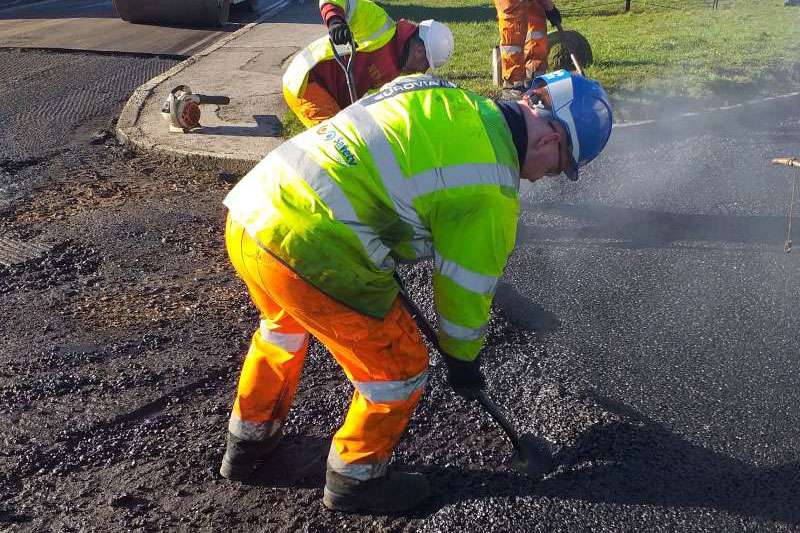 Telford College is the first in the UK to put its road surfacing apprentices through a new assessment programme – and every member of the first cohort has passed with flying colours.

The level two apprentices have been combining their studies with jobs at highways giant Eurovia UK for the past 18 months, working towards a new Road Surfacing Operative qualification.

The programme has been developed by the college in partnership with Eurovia to help tackle skills gaps in a sector with an increasingly ageing population.

Robert Lees, Telford College’s director of engineering and aviation, said: “This is a fantastic way to kick off the programme. Each student had to successfully come through workplace observation and professional discussion tests, and they’ve performed brilliantly.”

Full time apprentices typically spend 15-18 months working towards the end point assessment for their road surfacing operative qualifications, which are the first of their kind in the UK.

Together with its associated companies, Eurovia UK teams are responsible for improving over 50,000 kilometres of the UK’s highways network. The college’s partnership with Eurovia dates back to 2015, and began with the introduction of a highways level two apprenticeship.

Since then, Telford College has been supporting Eurovia with regular recruitment drives, typically enrolling between 40 and 50 apprentices on highways and road surfacing programmes.

Robert said: “We began talking with Eurovia about adapting the programme to create a brand new road surfacing level two apprenticeship, and designed the current programme bespoke to their needs.”

Due to the success of the programme, Eurovia also introduced the Institute of Asphalt Technology and its members to Telford College.

Paul Goosey, managing director of Eurovia, said: “The need to train and develop apprentices has never been so important in our industry. This new Road Surfacing Operative Apprenticeship is essential to ensure a professional and sustainable workforce for the future of our surfacing business.”